Good morning all, I decided to provide an update on Hummingbird Resources last week after they released their Q3 results.

Since then, another lock down has been announced, which is unlikely to boost market confidence.

That being said, for investors willing to bear the volatility it may be the perfect chance to pick up some bargains which I believe includes Hummingbird.

Since I last covered the company, one major risk has come to the fore – the location of its mine. Mali.

On the 18th August, elements of the Malian Armed Forces began a mutiny which led to the removal of the country’s President, Ibrahim Boubacar Keita. This was the second coup in ten years which underscores the political instability off Mali.

For more information on the coup see Wikipedia.

Q3 results – need to do better

Hummingbird will be quick to highlight a large reduction in debt but a circa 30% increase in costs isn’t impressive.

Dan Betts, CEO of Hummingbird explained the explosion in costs with the following:

“Despite a more difficult quarter impacted by some of the heaviest rains on record hitting site, compounding the already difficult logistical challenges imposed upon us through a combination of managing COVID-19 issues and the temporary closure of borders due to the military coup in Mali, we are now in the dry season, borders are back open and we are looking to have a strong finish to the year in terms of production.”

Hummingbird can’t necessarily be expected to have contingencies in place for a coup (although given the country’s history it would be prudent to do so).

And with Covid-19, I’m willing to provide some slack although I believe that the company should’ve dealt with logistical issues early in Q2 so I’m slightly disappointed this wasn’t achieved.

I’m less impressed by the excuse of heavy rain – a couple of years ago rain caused major disruption to Hummingbird and they should have planned for the rainy season.

Hummingbird built an airstrip during the quarter, which could explain some of the increased costs and will hopefully help to reduce logistical issues: 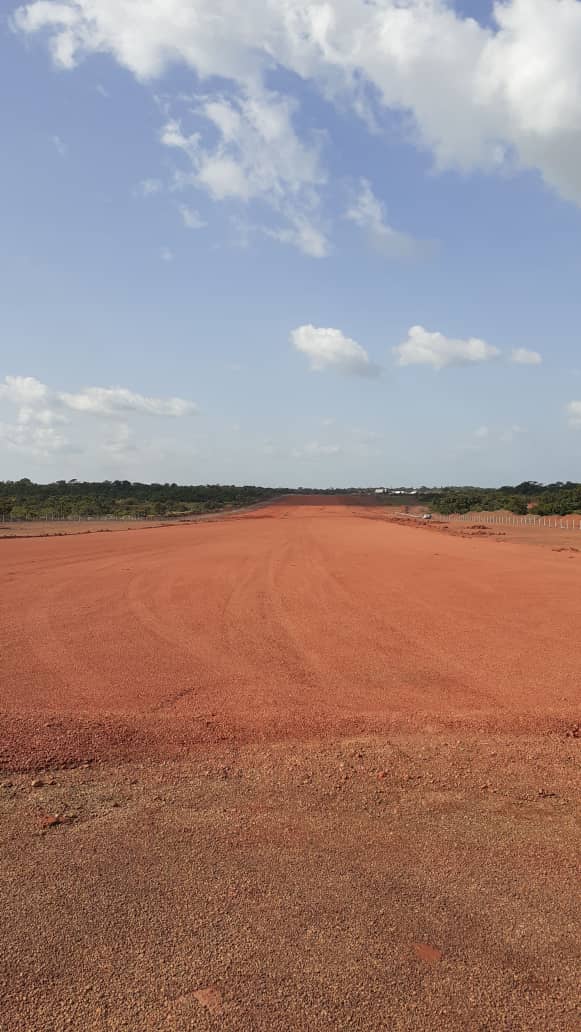 Once Hummingbird has net cash, arguably the business is less risky – ideally I’d like to see $10 million net cash which would mean that the company could weather issues such as a coup or reduced gold price without becoming reliant on third party debt.

Hummingbird’s exploration has been succesful and even included “16m @ 9.64 g/t from 47m depth (SNERC0317)“. I don’t expect that investors will take a large amount of notice of this until drilling results are converted into the resources, however it bodes will for increasing the life of mine which is an area of weakness for Hummingbird.

One part of Hummingbird’s Q3 results jumped out at me – “Hummingbird is awaiting the award of the mining license to then begin development works which are expected early 2021“.

Should the mining license be forthcoming, Hummingbird will be on a clear development pathway to become a multi-mine 220 koz producer.

“Progress at Dugbe Gold Project ( “ Dugbe Project“):  Joint venture partner Pasofino Gold Limited (“Pasofino”) (TSX: VEIN) gained funding during the quarter and have now begun works to carry out and fund a definitive feasibility study (“DFS”) and exploration works to earn-in its 49% stake in the project once these agreed milestones have been met.

Pasofino is targeting two new exploration targets which is very encouraging. Recent progress updates from Pasofino can be found here. At the time of this release Pasofino’s market capitalisation on the TSX was C$25.3 million.”

What excites me about Dugbe is not anything stated in RNSs but what Dan Betts stated in a recent interview which was that Dugbe could contain not just millions of ounces of gold but tens of million of ounces and that it’s a multi-mine prospect:

Should Dan be correct, Dugbe could be a $bn+ acquisition in the future, however I suspect significant drilling expenditure would likely be required to unlock the investment.

As in an investor in Hummingbird, I may be biased however for £118 million at c. 33 pence, I believe it offers significant upside should the gold price remain firm, especially with production potentially nearly doubling within less than two years once Kourassa comes online.

I hope people’s portfolios aren’t too decimated over the coming week – I’m expecting a large hit to mine!

A glutton for punishment - investing primarily in junior mining stocks for over five years. Passed CFA level 1 and aim through fundamental analysis to understand whether companies are over or undervalued by the market. Believes that analysis and liquidity on AIM are poor leading to mis-priced investments. Long term goal - financial freedom.

This website is provided “as is” without any representations or warranties, express or implied. Cube Dot Investments Limited makes no representations or warranties in relation to the information on this website. The website is not intended to address your particular requirements. In particular, the information on this website does not constitute any form of advice or recommendation and is not intended to be relied upon by users for investment decision-making purposes.
NEWER POSTCube Report (3 Nov 2020) – US Election Day Roundup
OLDER POSTCube Report (2 Nov 2020) – Ocado snaps up some bargains

Keep in touch by joining our newsletter.